The Shark Lady January 24, 2010 Business, Software and Apps No Comments

Despite the recession and the overall tendency to look for free alternatives, it seems that OS makers had a good year in 2009.

According to a report by NPD group, U.S. retail operating systems boxed software revenue increased 35% in 2009. Other software creators weren’t so successful: overall non-games software revenue has dropped by 7% in 2009 to $2.4 billion. 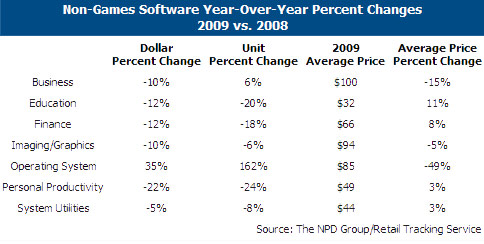 Operating systems (such as Windows 7 and Snow Leopard) was the only category to post both a revenue and unit increase over 2008.  With new operating system releases from both Microsoft and Apple in the back half of the year sales traffic, volume, and interest in boxed software were at very high levels.  Both OS releases showed record sales.

MS Office Home and Student delivered strong sales volumes during both the back-to-school and holiday periods because of an aggressive price promotion. Apple’s iWork 2009 also saw strong unit volume growth as average prices declined more than 15% on the single-user version.

Just a reminder: if you don’t want to pay for your operating system, there are plenty of free alternatives out there, especially Linux-based.