comScore released its 2009 U.S. Digital Year in Review Report, and it has some interesting data. One of the hottest topics (still) on the net, is social networks. So, what happened in the social media in 2009?

Facebook and Twitter both posted triple-digit growth. Facebook surged to the #1 position among social networks for the first time in May 2009, and continued its strong growth trajectory throughout the year, finishing with 112 million visitors in December 2009 – up 105%  during the year. 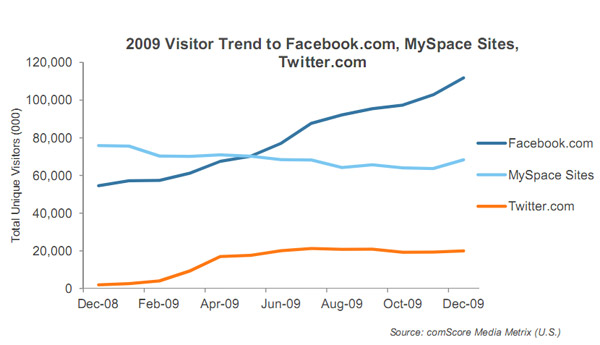 Twitter finished the year with nearly 20 million visitors, a huge leap from just 2 million visitors in 2008. Much of Twitter’s extraordinary audience growth occurred during the first few months of 2009.

MySpace has experienced some softening in its audience; however, a new strategic focus on entertainment content is exhibiting signs of success with MySpace Music having grown 92% in the past year.

Facebook has also shown impressive growth in unique visitors, page views, and total time spent – all increased by a factor of two or more. As more people use Facebook more frequently, the site has grown to account for three times as much total time spent online as it did last year.

MySpace’s user composition tilted toward younger users in 2009. Users age 24 and younger now comprising 44.4% of the site’s audience. Facebook’s audience was evenly split between those younger and older than 35 years of age.

The initial success of Twitter was largely driven by users in the 25-54 year old age segment, which made up 65%  of all visitors to the site in December 2008. This a different segmentation than the common one in social media networks, where usually the younger audience build the brand’s success. In 2009, with the help of celebrities and media coverage, younger users flooded to the site in large numbers, with those under age 18 (up 6.2 percentage points) and 18-24 year olds (up 7.9 percentage points) representing the fastest growing demographic segments.

Facebook is still the strongest network, by far, and at the moment there doesn’t seem to be a serious competitor for it.

According to comScore, social media marketers must be aware that social networks can deliver substantial reach for ad campaigns and despite low click-through rates there is measurable view-through value from these ads.