The Internet is Nominated for a Nobel Prize 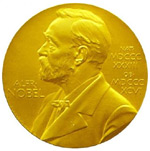 A very unusual nominee for the Nobel Peace Prize has been declared, and it’s no other than the internet itself.

This surprising nomination may be partly due to a campaign run by the Italian Wired Magazine. The award will be given to the person (or organization) who has “done the most or the best work for fraternity between nations, for the abolition or reduction of standing armies and for the holding and promotion of peace congresses.” The creators of the World Wide Web — Tim Berners-Lee, Larry Roberts and Vint Cerf — have been nominated, too.

Russian and Chinese activists are also among a record 237 nominations under consideration by the Nobel Peace Prize committee for this year’s award.

Apparently, there’s a renwed interest in the prize, after the US president, Barack Obama, received it in 2009. Obama received the Nobel Peace Prize for, among other achievements, bringing the U.S. into the fight against global warming and for supporting multilateral diplomacy.