Kongregate is one of the best games sites around – it features tons of various games, has a large and interesting community and supports game developers. The site is successful and full of activity, and not a day goes by without me visiting it. And what do you know – there are actual people behind the site and the games! 🙂

Jim Greer, CEO and co-founder of Kongregate, did an AMA (Ask Me Anything) session on Reddit. It was extremely interesting and Greer supplied some fascinating facts. Here are the highlights from the chat:

Kongregate has 8.5 million unique visitors per month and logs 21 million hours played per month. The site’s 95% peak bandwidth usage from the datacenter is 75Mbps, but that’s just for html. All of the site’s assets are delivered through an Akamai CDN.

As for money matters, Greer says the site is breaking even, and should become profitable this year:

We’ve done 3 rounds of funding totalling $9M. The first was an angel round led by Reid Hoffman, who is the founder of LinkedIn and investor in Facebook, Flickr, Last.FM, among others. Then an VC firm called Greylock invested $5M – they are also investors in Facebook, LinkedIn, Digg, Pandora, Zipcar, Redfin, Redhat, etc. A then Jeff Bezos put in $3M. This was his personal money, not Amazon’s… 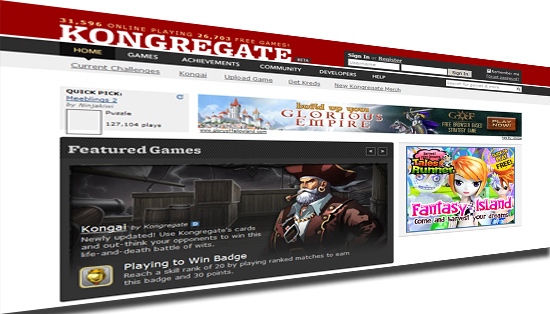 The Man Behind the Site

As a woman and a gamer (not necessarily in that order…) I was very interested about the status of female gamers on Kongregate. Greer answered my question and reported that only 10% of the registered users in Kongregate are female. Their favorite games are:

This is very interesting, since you can see that women don’t play only “casual” games, but go for more hardcore types, such as tower defense games.

When asked if game developers can actually make a living off of the games in the site, Greer said:

Some of the virtual goods games are on track to do $500K-$1M total revenue this year. Among single player games there are lots of developers making tens of thousands of dollars in their share of ad revenue. And that’s just on Kongregate – definitely possible to make a living on flash games, though not easy.

This is great if you’re trying to, say, sell games in an app store. It sucks if you are a game player or Flash game developer (of which there are many). I’m all for new formats, like Unity, but it sucks to shut out so much great stuff.