Castle Wars is Back – Cooler than Ever

The original Castle Wars game on Kongregate is one of the first games I’ve played on the site – and one of my favorites.

Castle Wars is a tactical card game, in which you have to use different resources and weapons, in order to build your castle or destroy the enemy’s castle.

And now we have Castle Wars 2 – which is basically the same game, but with new features, better graphics and cooler sounds.

The objective remains the same – destroy the enemy’s castle or build your own to a level of 100 – that’s how you win the battle. Each card represents a different resource, attack, defense or action. You have magical attacks and defenses, cards that build your castle, cards that steal and sabotage the enemy and many different vicious attack cards. 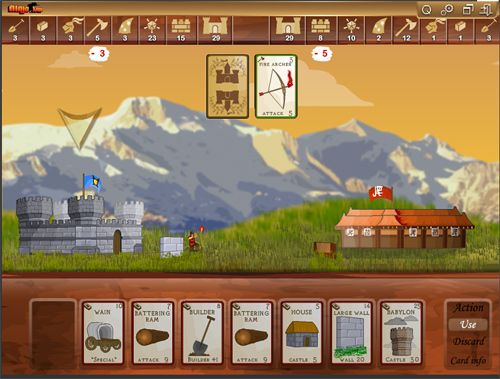 The use of each card is dependent on the amount of resources you have. For example, you need bricks in order to build a wall to defend your castle. Bricks and other resources are created automatically each turn – but your enemy can steal or sabotage them.

Castle Wars 2 now gives you the option to campaign and go after several castles. You can also practice, change the composition of the card deck and go against other gamers in the multi-player option.

The element of luck plays a part in the game, but planning and strategy will usually help you more on your way to victory. I find the AI a tad stupid sometimes, which makes the game a bit too easy. I guess that’s what the multi-player mode is for.

Castle Wars is a great casual game, which is also perfect for playing at the office (single player mode, at least) – it’s not time limited, and your opponent will wait until you are ready to make the next move. Here’s a little clip of Castle Wars 2 gameplay I created (in which I win, of course 😛 ):