First Android Trojan for Mobile Phones is on the Loose 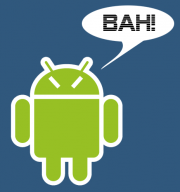 The Trojan is camouflaged as  a harmless media player application. Users are prompted to install a file of just over 13 KB with the standard Android extension .APK. Once installed on the phone, the Trojan uses the system to begin sending SMSs to premium rate numbers without the owner’s knowledge or consent.

According to Kaspersky, the Trojan-SMS category is currently the most widespread class of malware for mobile phones, but Trojan-SMS.AndroidOS.FakePlayer.a is the first to specifically target the Android platform. That said, there have already been isolated cases of devices running Android being infected with spyware. The first such program appeared in 2009.

Kaspersky Lab recommends that users pay close attention to the services that an application requests access to when it is being installed. That includes access to premium rate services that charge to send SMSs and make calls.