Twitter keeps growing, but it’s not clear to what end, exactly.

According to a report by The Metric System, Twitter ended the year 2009 with 75 million users. 6.2 million new  accounts are created every month – about 2-3 every second.

No doubt, this is an impressive amount of users – but it seems that a large part of them isn’t active. According to the report, 25% of accounts have no followers and about 40% of accounts never even sent a single Tweet. 80% of all Twitter users have tweeted fewer than 10 times. The average Twitter user has 27 followers, down from 42 followers in August 2009. 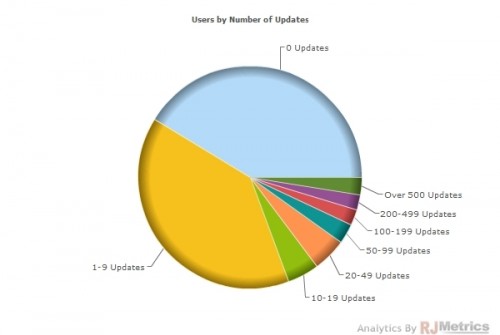 And the most problematic piece of data – Only about 17% of registered Twitter accounts sent a Tweet in December 2009 – an all-time low. That said, the report also states that the average number of Tweets increases over a user’s lifetime.

Where is Twitter headed? It’s still growing, and in an impressive rate. However, many new users just register and don’t even bother to tweet. A lot of these are probably bots and spammers, so we are all happy that they don’t tweet much.

It seems that more seasoned users are using Twitter more and more as time passes, which means that it takes the average user time to understand what for, how and why to use Twitter. Will Twitter ever reach the popularity of Facebook? Let’s see what happens in 2010.