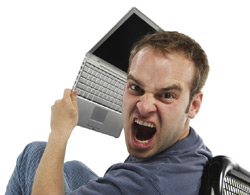 Microsoft has announced it was looking into a problem concerning Windows 7 and laptops.

Windows 7 users have been complaining of battery issues for a while now. The OS seems to report a drained battery in the laptop – long before the battery is actually exhausted. Microsoft claimed that the problem was in the Windows 7 tool that decides when the battery needs to be recharges.

“We are investigating this issue in conjunction with our hardware partners, which appears to be related to system firmware (BIOS),” a Microsoft spokeswoman said today, “The warning received in Windows 7 uses firmware information to determine if battery replacement is needed.”

Some users believe that the problem isn’t a faulty report – they claim that Windows 7 actually ruined their laptop battery. Users that rolled back to Windows XP claimed that the batteries showed poorer performance. In other words, Windows 7 might eat your batteries.

Last year, reviewers of Windows 7 said the OS cut battery life by almost a third when compared to XP.

Windows 7 is gaining popularity.It now accounts for 1 in 10 computers accessing the Web, according to Net Applications. Still, it seems like there are a lot of people out there who aren’t ready for an upgrade.

In other words, like with most Microsoft products – don’t rush to upgrade. If you have a laptop or a netbook with XP on it, you might want to wait just a while longer before switching an OS or buying a new laptop with Windows 7 on it.