What do Americans do Online?

Only a few years back, the most popular online activity was e-mail. It was the fastest, most personal, most useful service, and it reigned with power for many years as the biggest time spender of online users.

Times have changes, though, and nowadays it’s the social networks that take most of our time: Americans spend about a quarter of their time online on social networking sites and blogs, up from 15.8% a year ago, according to new research by The Nielsen Company. The personal side of the net is still there: users spend 36% of their time communicating and networking across social networks, blogs, personal email and instant messaging. 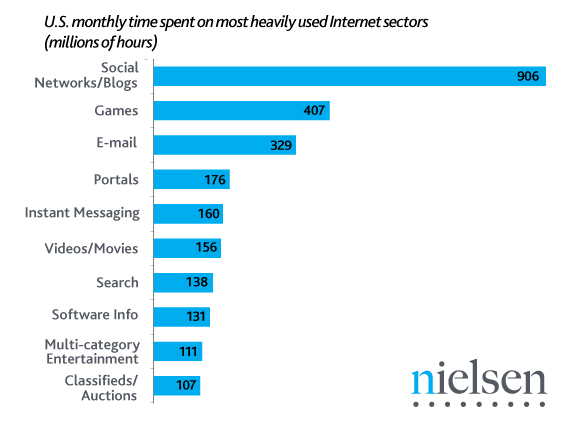 Actually, e-mails rank only 3rd on the “Time Spent Online” chart. Gaming takes the 2nd place, which is heavily linked to the popularity of social networks. It’s pseudo-games like Farmville that tipped the scales thus, no doubt. E-mail is still the top activity when it comes to mobile usage – an increase from 37.4% to 41.6% of U.S. mobile Internet time.

June 2010 was a major milestone for U.S. online video as the number of videos streamed passed the 10 billion mark.

Although the major portals also experienced a double digit decline in share, they remained as the fourth heaviest activity, accounting for 4.4% of U.S. time online.